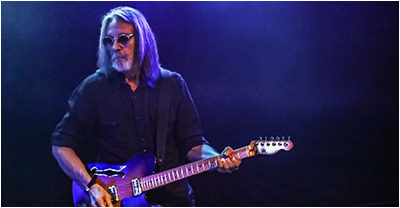 .
Randy Ray Mitchell knew he wanted to play guitar since a friend showed him three chords when he was nine. It took him three years to convince his dad to spring for his first guitar, a $25 Harmony gut string.

By then, he had the bug and never looked back.His favorite players were surf guitarists then later Eric Clapton and Jeff Beck. “I also admired the studio wizards like Larry Carlton, Dean Parks, Lou Shelton…”, he says.

He took to the upright bass in junior high school, and dove head first into years of college level theory classes. Eventually, he was performing with three different high school pit orchestras playing either guitar or bass, depending on what was needed most. He was doing horn arrangements for his own bands as well.

Studio work was picking up also, including contributing to a Michael Martin Murphy album that got him a gold record.

“Like a lot of working musicians, I’m a jack of all trades, covering a variety of musical styles”, he says.

He had a long association with Donna Summer, and recorded with Warren Zevon before he passed, winning a Grammy for Zevon’s CD “The Wind”.