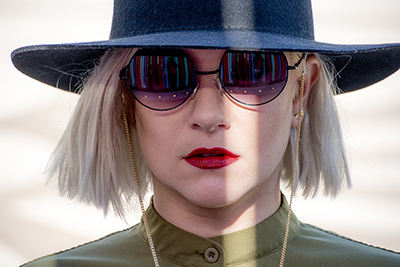 “I have a pretty strong and powerful voice for a little white girl from Ohio”, laughs Mindy Jones. “If you play me a melody one time, I can pick up and perform the harmony pretty easily”.

It’s not bragging if you can back it up, which she does.

Mindy started singing at a very early age, singing along with her mom’s Mariah Carey, Michael Jackson, and Whitney Houston records. Then, when she was 11, her dad, as choir director, needed an alto, and she fit right in.

In 2011 she met Moby, and has been his lead ever singer since. Her most memorable performance? “Hands down, the Walt Disney Concert Hall with the world famous LA Philharmonic Orchestra in October 2018.

Mindy met Dan Carlson in 2010 through drummer Butch Norton and has been singing for Waldo Bliss ever since. “I think he has the perfect motto for his music”, she says. “Music for the Inside of Your Body”. I really love the harmonies, which are soothing and unparalleled. He uses intricate and complicated chords, and it’s just sweet and beautiful music.”

In addition to her vocals with Waldo Bliss, Mindy is also singing for cartoons, commercials, TV shows and movies.

“I’ve been so lucky and am so grateful for all the licenses I’ve had throughout the years. One of my favorite ones was on a show called ‘Blindspot’ on NBC. It was a cover of one of my favorite songs, “Where is my Mind?” by the Pixies. It was featured for about 3 minutes during a dramatic murder montage.”

She’ll be releasing her second solo EP this year with a lot of different sounding songs. “I’m also very excited to be currently working on a new ADLT VDEO EP with my partner and producer, Luke Top.

Gonna be a big year!”