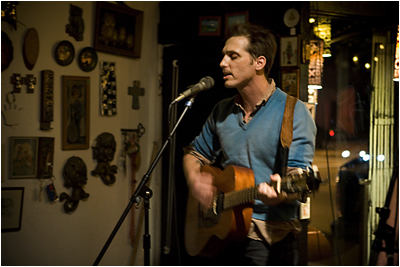 Vocalist Daniel Ahearn first met Dan Carlson when his band opened up for Waldo Bliss at Kulak’s Woodshed in 2011. A friendship began and two years later, Daniel was invited to join Waldo Bliss and sing harmonies.

What did Daniel like about Dan as a songwriter? “He has a real love of the classics”, he says.”Not a lot of people are willing to work that hard to compose songs that are intricate without feeling labored. Dan’s music has that post-Beach Boys, sun-kissed vibe. It’s a little more evolved, grooving, deceptively simple, with a special harmonic emphasis. I love singing with Waldo Bliss.”

Daniel spent a decade growing up in the South Bay area of Southern California, so he understands the sun-kissed vibe. His siblings took naturally to music. “My sister could just come home and play songs on the piano. My brother had a beautiful tenor voice.”

Daniel did some musical theater in middle school. But, he says, “I’ve always been a little rough around the edges.” After high school, he went to Sarah Lawrence to study poetry and philosophy.”Even though I’ve been singing all my life, it wasn’t until my early 20’s that I got serious about it.I finally gave myself over to the pursuit of music.”

“Music for me is passionate and addictive.” In some ways, he says, “I feel a little out of step with my generation. I’m obsessed with the power of language. I really care about songs.”

Thus, his major influences have been the singer-songwriters, the storytellers. Among them are Jackson Browne, Leonard Cohen, and Randy Newman. He has a special love for artists like John Prine, who didn’t have the technically wonderful voices, but found a way to emote and be true to their songs. He always admired George Jones and newer artists like the Flaming Lips.

Daniel took the plunge into performing as an adult at 24 or 25. His first show was at an electronic dance club in New York City. “It was huge, weird, and revealing”, he says.

In 2008, he began recording under his own name. Daniel produced the ambient electronic record, “Readings from Wheeling Motel”, featuring the poetry of Franz Wright, in 2009.

In 2011, he released his first full-length solo record, “Long Way Home”. Since then, he has been playing and recording with Mindy Jones, and a full-length record with her is due out in late 2013.

“Like most men,” he says,”I tend to be radically dishonest at the core. One place I can be totally honest and naked is my music. In fact, there are two things I am true to: my son and my music. Everything else comes and goes.”