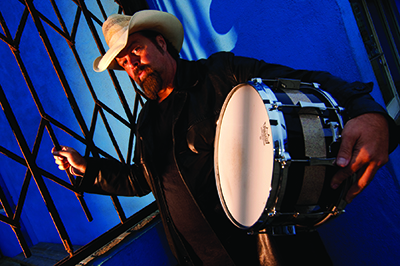 Butch Norton started banging on pots and pans as a young child in the San Francisco Bay area and has been at it ever since. “My style is barbaric meets primeval meets medeval meets ecstasy”, he says. He began playing drums professionally at the the age of 17, and moved to Southern California in 1980 to study with master percussionist John Bergano at California Institute of the Arts.

Despite what he calls “my complete lack of ability”, due to “sheer luck”, he has enjoyed a distinguished recording and performing career. Butch recorded and toured with Lowen and Navarro from 1989 to 1992. In 1993, he met the man called “E” and toured with him to support the “Broken Toy Shop” album on Polygram.

In 1995, E and Butch formed the eels and signed with the new Dreamworks label. Their first single, “Novocaine for the Soul”, earned several award nominations, and eels songs were featured in movies ranging from “Shrek” to “American Beauty”.

Butch has also worked with Rufus Wainwright, Tracy Chapman, and in 2007, he joined Lucinda Williams as her permanent drummer.

Asked to describe drummers he enjoys today, he cites “military bands, especially navy and marine corps” and says he is “a big fan of polka bands in the Minnesota region”.

Butch has played a number of gigs with Waldo Bliss as well as their album, “Music for the Inside of Your Body”.

Currently he records and tours with Lucinda Williams on a permanent basis with the Buick 6.

Butch solos on the Hang at Kulak's Woodshed