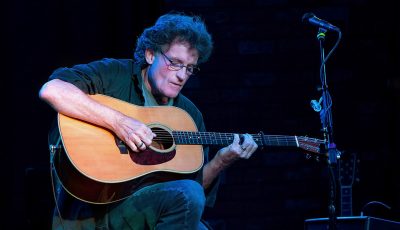 Brian has played a number of gigs with Waldo Bliss, one being one of the band’s favorites when they opened for Petula Clarke. His guitar playing was welcomed on that show as well as his vocals on numerous previous gigs.

Brian Jenkins never had a voice lesson, but he learned a lot about music from the school of hard knocks. He started singing in the choir in elementary school. Took drum lessons and started playing trumpet as well. Then he got into rock and roll in junior high and picked up the bass.From there, he formed a band called “The Numbers” in high school, which became a regional success on the east coast and stayed together for ten years. “It was learn while you earn”, says Brian. “We played clubs and frat parties from Delaware to the Jersey Shore”.

Nothing came easily, he remembers. “It was a hundred hours a week of hard work. Packing and unpacking. Setting up and playing four hours. Tearing down and packing again. Then off to the next gig.”

After ten years as a working musician, Brian moved to the west coast to start a new life. He found a place to crash in LA, landed a job, and wound up managing the Guitar Center in Lawndale.

He never stopped singing. “Every single day of my life”, he says. Then, one day, twenty-five years ago, he met an outgoing, persistent musician named Dan Carlson. They’ve been playing together (on and off) ever since.

Brian counts Neil Young, the Beatles, and the Stones as big influences, as well as Todd Rundgren and his “groove master” bass player, John Siegler.

He’s a family man, now, with a stable, full-time job, but still loves playing when he can. “Dan always wants to create synergy, with good people and structured harmonies, but lots of freedom.”

In his spare time, Brian has become a luthier, and is now completing his fifth guitar. It’s a college graduation gift for his niece, “so there’s a lot of love going into it”, he smiles.

Check out an early live version of “Emily Goes To Sleep” with Brian on bass, Dan Carlson & Rick Greenburg on guitars and Matt Starr on drums.   It’s nice…